Action movies take three to tango, a wild dance of hero/villain/captive culminating in some serious high-wire fighting over pits of rabid crocodiles.

The villain has more style, loves a shiny, jagged knife (because she wants that shit up close and personal), and has a pet that’s cooler than yours. Not a dog or a cat, something more…MORE. Like a baby panda. 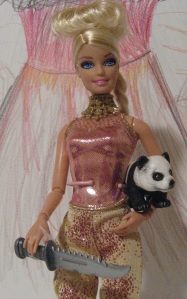 Also, she builds her lair beneath an active volcano

The hero’s in black ops, which I assumed meant she wore lots of black. She’s ex-CIA, ex-military, ex-coast guard, and an ex-librarian because I like to read. She uses a gun because killing from a distance is somehow humane. 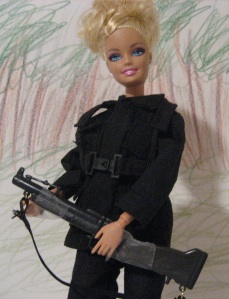 Doesn't need to see the light die in your eyes

But because we’re hard fucking core, we can’t use weapons to hurt each other. That shit’s for babies who don’t KUNG FU. 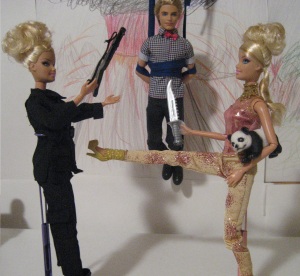 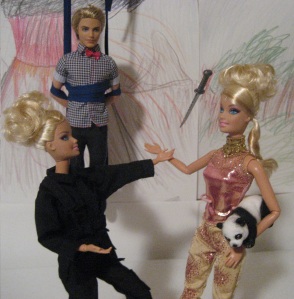 Battle royale under an exploding volcano…full of crocodiles (not pictured, but trust me, they’re down there)! 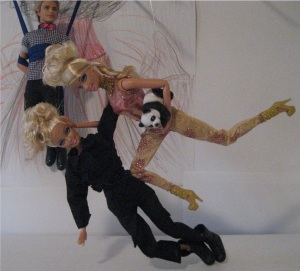 Mind if I drop in?

Flying kick with lamer comment! (The villain is always cleverer than the hero. See: Schwarzenegger, Arnold.) 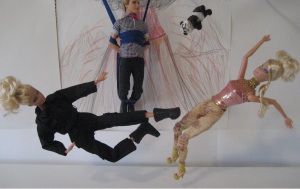 Sorry, I've got to take out the trash!

After several death defying jumps over lava crocs, the hero wins, saves the captive and either kills the villain or leads her away in cuffs. 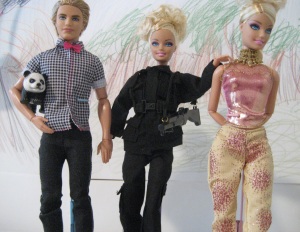 Let's get this panda back where he belongs!

But…I’m disturbed. My three-way tango? Not so much. You see this?

That’s not a tango-er, that’s a helpless muppet. It’s more like a love…line, than a triangle. All the conflict, all the passion is between the hero and the villain. This thing hanging behind them could be a giant plastic pear for all the ways it drives the plot.

The villain may have tried to seduce him. The hero may have realized that she wanted to live/retire/random epiphany because of him, but in the end, he’s a tool, in more ways than one. He’s a plot device, not a character, as replaceable as they come. 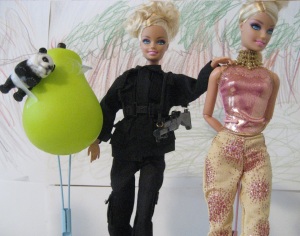 Let's get this panda untaped from this pear

And in the movies, that was always a woman.

What the shit? I didn’t want to be hanging in the villain’s lair under the volcano. I wanted to be swinging by my whip and cutting fools with my light saber. I wanted to kick ass on my own time, my own way. I’d already started on the path to writing strong female leads, and Barbie was going to help.

Did you ever put yourself in movies or television? Which role did you covet? (It’s all right if you wanted to be rescued. ^_^)

10 thoughts on “IWW: The Love Triangle”